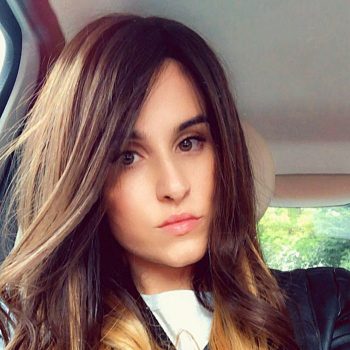 “Everyone there is lovely and makes you feel so special.”

Earlier this year I began to develop bald patches. I was in the shower and my hair was wet and lying flat against my head and I noticed a small bald spot. I wasn’t sure what it was, so I just put it to the back of my mind.

It wasn’t until I looked again and the patch was getting a bit bigger that I went to the doctors and they told me I had Alopecia Areata. So that is how I found out I had it and that was early March 2019.

Alopecia doesn’t run in my family. If I look back at pictures, I always had really long thick hair – the thickest in the family. I had never, ever in a million years thought my hair was going to fall out. So, it was a big shock and I think I am the only one in my family this has happened to.

I was prescribed with steroid cream, but it didn’t do anything to be honest with you and my hair was coming out more and more. Because I lost quite a lot of hair on the top of my head, it was getting very hard to hide and I had to have my hair up all the time. If I tried to have my hair down and ‘hair spray’ it to the side I felt quite self-conscious because if the wind blew, you could see it.

The doctors put it down to stress and put me on anxiety tablets. I think I have always suffered with anxiety and they put me on the medication when I started to lose my hair as they thought it might be a bit of a vicious circle. I have to say that it really did help. I think it made me see things from a different perspective and I am handling it pretty well now.

But it can affect other people too. For example, my Mum was in tears all the time and still gets really upset about it… she is reading lots of research and took me to see a consultant. When I did put myself in her shoes and think about if it was my little girl who started losing her hair, I would probably be devastated as well. So, I can understand how she feels.

I had my system fitted in May 2019. It was a strange feeling because like I said, I had lost quite a lot of hair on the top of my head and I thought “Oh it feels really weird having hair and not having to worry about it”.

Originally, I was only going to have short hair, but then when Hair Solved were putting the system on, I began to change my mind so they put longer extensions in to try and give me exactly what I wanted.

I went on holiday to Greece a little while afterwards and I got so many compliments like, “Oh my God you look so good” or “I love the way you do your hair”. It was so easy to care for. I kept it up, I plaited it, or I plaited it and twirled it into a bun, and it was absolutely fine.

Going through all of this has made me stronger as a person and given me more confidence. I’m happy for Hair Solved to share my story on their website and social media and I have even started my own Instagram page. Tara, my sister who works at Hair Solved, said a girl had come into the Salon and the reason she was there was because she had seen a picture of me on the site.

She showed Tara a photo and Tara said, “That’s my sister!”. She asked if she could text me because she wanted to talk to me; to talk to someone who would understand what she was going through. She gave me her number and I texted her and we have been talking. People don’t really know about the condition and I have had such a great response, that has really built my confidence up as well – all through Hair Solved.

I would absolutely 100% recommend Hair Solved’s system for anyone with Alopecia. It is a shame it isn’t available on the NHS – especially for children.

Back to hair loss stories