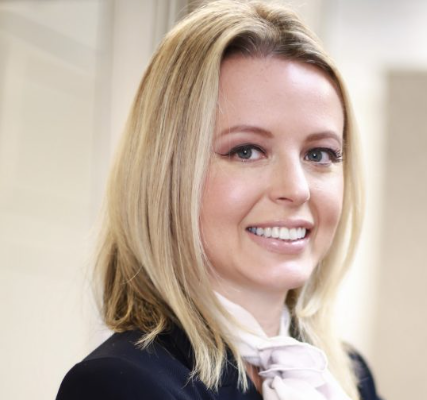 We are so excited to share another insightful Q&A, meet Natalie, our Salon Director.

What is your current role and how has that changed since you joined Hair Solved?

My Current role is Northern Regional Director of Hair Solved Manchester and Scotland.

My first role within the Company was as a manager at the Manchester Salon in 2009. After about a year I was made the regional director of the Hair Solved Scotland Salon where I moved up to Glasgow set up and ran the salon there for about three years.

The Manchester salon was getting busier so I was asked to move to Manchester and become a regional director for this Salon also. So I am based in Manchester and I still travel to the Scotland salon when needed.

What is your past work experience and how did that lead you to your role at Hair Solved?

I started working in a salon in Chelsea as a Saturday girl I really enjoyed the creative side of it. Then I got a job as an apprentice in a small local salon where I worked for over a year while doing my hairdressing NVQ. I came across a job working with extensions and female hair loss solutions in London. I worked there for over 7 years and found it very rewarding.

Then Lucas, who I had worked with previously, opened Hair Solved in Manchester offering his very own female hair loss solution, the Enhancer System.

Two years after the Salon opened he asked me to be the manager of the Manchester Salon and that is when my husband and I moved up to Manchester. 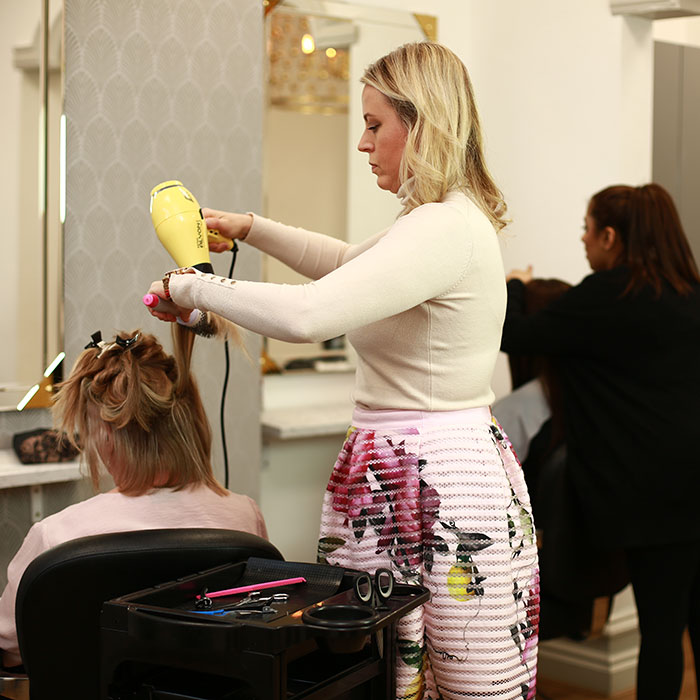 What are your goals and aspirations for Hair Solved and for yourself?

I would love to get the word out more that we are here to help the many women that suffer from hair loss, whatever the cause or condition.

So many women just think they can only go down the wig route. I want any woman looking for a hair loss solution to know there is an alternative and one that is suitable for partial hair loss, total hair loss and thinning hair.

I would love it if women could get the Enhancer system on the NHS plus the maintenance etc and the doctors would just refer them to us.

That would be amazing instead of so many women spending so much money on the many lotions and potions out there.

Even if they could use the vouchers, they get towards the NHS wigs would be a bit help to so many women.

Are there any areas or types of hair loss that you are particularly interested in from either a professional or personal perspective?

They are all interesting,

Alopecia is a very interesting one. There are so many different types of Alopecia from areata just little patches that come and go. Frontal Fibrosis Alopecia that tends to happen to women after a certain age; the hair recedes slowly from the front and sides and it will never grow back. I find we are getting more and more women with this particular form of Alopecia.

Some forms of Alopecia just come and go with no rhyme or reason, some people have symptom like itching or burning sensations before the hair falls and other have nothing but lose some hair a certain time after a period of stress. After 21 years of doing hair systems I thought I would see a pattern, but it’s just so unpredictable. 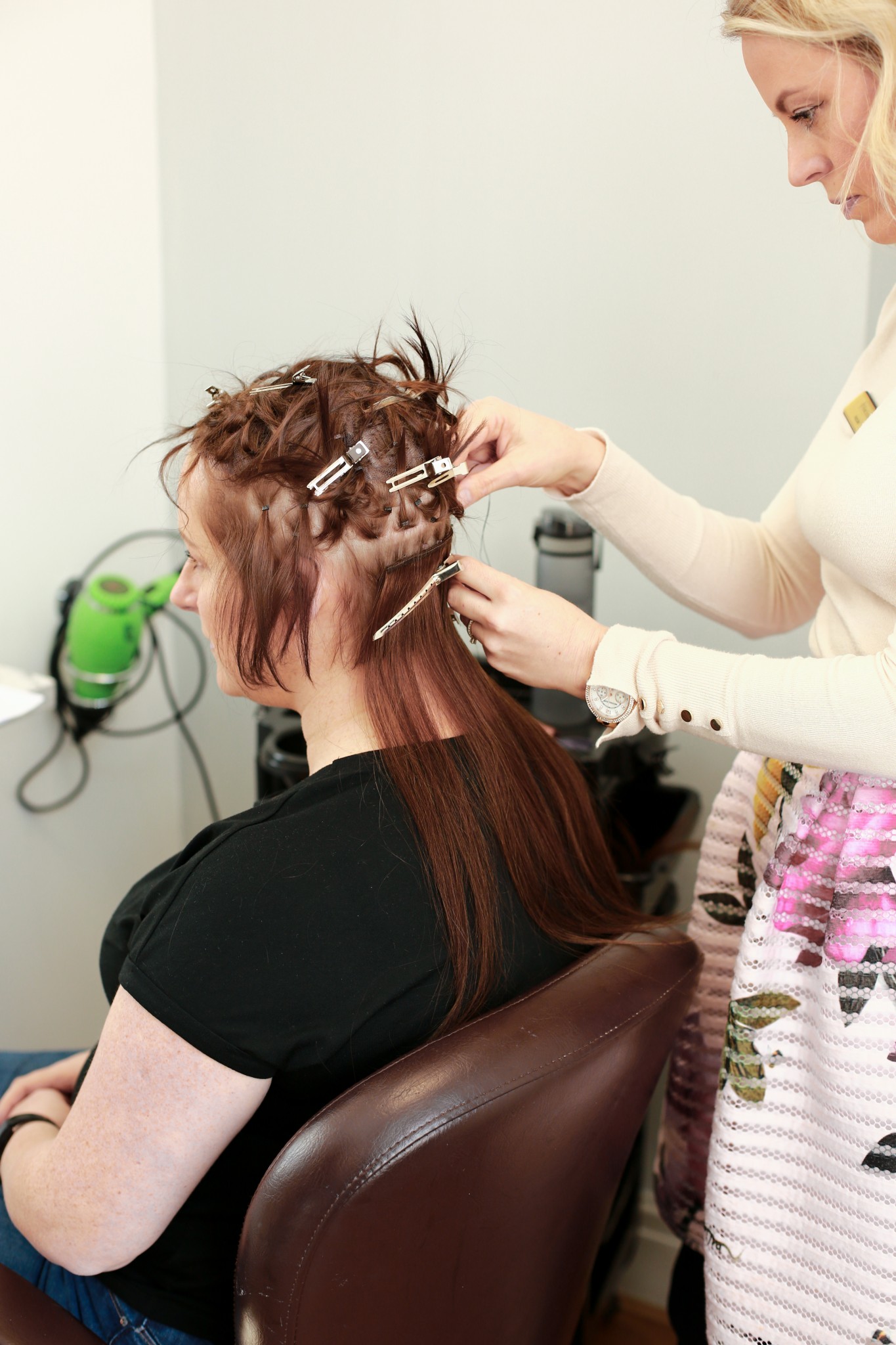 Do you think the sector that Hair Solved is in gets enough recognition?

Hair Solved gets recognition but I don’t think it’s ever enough as most people that come to us had to search for us and didn’t even know that what we do exists unless they know somebody.

It’s hard because it’s such a private subject to talk about.

Do you think the emotional and physical impact of hair loss gets enough recognition?

I definitely do not think there is enough recognition regarding the impact it has, most often doctors are not sympathetic most of the time they get a voucher for a cheap wig which is very upsetting there should be counselling and more help out there for all women experiencing hair loss.

However, more and more women are wearing extensions and faking everything from nails to eyelashes nowadays so why not if we can and it gives confidence. So in many ways this has made mesh integration systems more normal too.

I do feel that our new customers are less scared of the unknown, such as having an Enhancer System, than ten years ago.

I would encourage anyone wondering if the solution is for them to have a look at the Stories Page on our website to read first hand client experiences.

You can find it here.

We asked Natalie what she felt made her unique and as you would expect her answer isn’t really about her at all, for anyone who knows Natalie it is always about her clients and her team. A role with Hair Solved Manchester really is a role that changes lives.

I do a bit of everything. I really empathise will customers and I love making new systems and showing them their new hair. I love the part when you show the customers what their new hair looks like from the back. That's normally when the tears of joy come. I do my best to keep everyone happy. I try to make the salon the best experience for all involved. Keeping a relaxed environment is so important to me even when the salon is very busy it is vital to make sure clients feel as calm as possible. Even normal salons can feel intimidating so we make every effort that our salon is the most warm and welcoming environment for all.

Find out more about our Manchester Salon.

If you are looking for an exciting new career or are an experienced hair stylist or technician then make sure you visit our Recruitment Page which lists all current vacancies. A role with Hair Solved Manchester is a role that really will allow you to change lives.