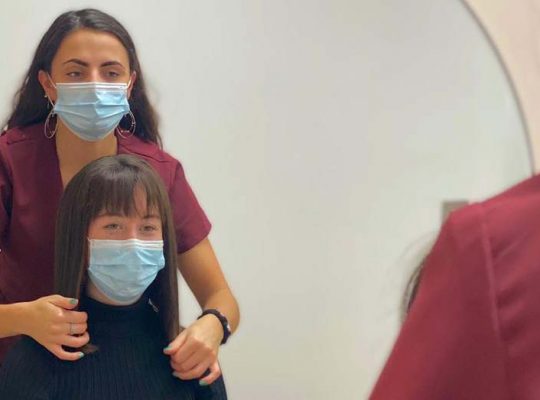 My name is Caroline and I’d like to share my personal experience of Trich and living with Trich.

When I was a toddler, I never sucked my thumb to soothe myself instead I would twirl my hair around and around until it was full of knots that my mum had to cut out. Then, when I was six, I started to pull out my hair when I was watching TV, reading a book, or lying in bed, because it felt good, and it relaxed me.

Soon, I had a little bald patch at the back of my head.

One of my earliest memories is getting my hair done at a salon for my Holy Communion, and the hairdresser having to come up with creative ways to cover the thin patches on my scalp. I stopped pulling it out for a short while, but then when I was nine I moved from the UK to Ireland with my family. Once again started pulling out my hair to soothe my anxieties around moving country away from my friends and starting a new school.

16 years later, I am still pulling out my hair.

When I first started pulling out my hair, there was extraordinarily little information or understanding about hair pulling, and my parents were naturally very concerned about my behaviour. Little did they know that I was suffering from a recognised, diagnosable disorder called Trichotillomania.

"Little did they know that I was suffering from a recognised, diagnosable disorder called Trichotillomania."

Trichotillomania (trik-oh-till-oh-MAY-nee-uh), also known as trich or hair-pulling disorder, is a condition that causes people to have an uncontrollable urge to pull out their hair, often resulting in significant hair loss. This can be hair from the scalp, eyebrows, eyelashes, or other body hair. Trich is part of a family of disorders called Body Focused Repetitive Behaviours (BFRBs), which includes hair pulling, skin picking, and nail biting, to name but a few.

As of yet, there is no known cause of the disorder.

Those with trich may pull their hair in response to stress or anxiety, but it is also common for there to be no apparent trigger, and people may pull their hair while bored, watching tv, reading a book, studying, driving, or working! It is estimated that 0.5%-2% of the population has trichotillomania. To put that in context, that is between 335,000 and 1,340,000 people in the UK alone.

Yet, it is still one of the most under-researched, stigmatised, and misunderstood mental health conditions. Often, having trich comes with a lot of shame, guilt, and embarrassment, and can lead to those suffering not seeking out help for their condition. Personally, having trich has significantly affected my self-confidence and esteem throughout my life. Especially as a teenager and young adult when so much pressure is put on girls’ appearances.

Trich can also be an incredibly isolating condition, with many believing they are alone in their suffering.  I didn’t meet another person with trich until I was 17, and I didn’t start opening up about my condition until I was 22, despite having the disorder for most of my life!

It is estimated that 0.5%-2% of the population has trichotillomania

Opening up about my disorder to family and friends was unbelievably scary, but finding support was even scarier. I had no idea where to look, what to expect, or whether I would find a support group at all! However, when we went into lockdown in March 2020, I decided to make the effort to find a support group.

And to my luck, I found the most wonderful support group through the TLC Foundation for BFRBs (an amazing charity based in the US): BFRB UK and Ireland. I was incredibly nervous logging in to my first online support group, but very quickly realised just how wonderful a community I had found.

Until that meeting, I had only ever met one person with trich, but now was in a (virtual) room full of people with the same disorder as me. And just like that, I no longer felt alone and isolated. Through the support group I have met a wonderful community of incredible people with BFRBs, I have learned so much about the condition and myself, and now I even help to facilitate the groups.

I would whole-heartedly recommend that anyone feeling isolated with trich find a support group. You can find the BFRB UK and Ireland support group network on Facebook, Instagram, and via email at bfrbgrouplondon@gmail.com. All of our groups are hosted online by Zoom, so can be attended from anywhere in the world, and take place fortnightly on Sundays from 2 – 3.30pm.

"The system forms a barrier between my hands and my natural hair has significantly decreased the frequency of my pulling..." 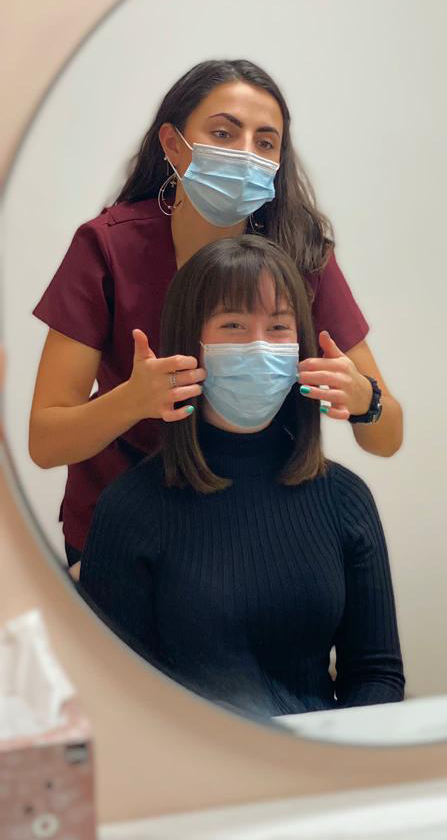 I was recommended Hair Solved by another person with Trich in the support group at the beginning of 2021.

In the past I had tried wigs but had found them uncomfortable and inconvenient, and I had never heard of hair systems. I first got my hair system in February 2021 and haven’t looked back. It looks completely natural and is so comfortable that often I forget that it’s not my own hair.

Although it hasn’t stopped me from pulling out my hair, the fact that the system forms a barrier between my hands and my natural hair has significantly decreased the frequency of my pulling, allowing my hair a chance to recover. Having the hair system has also allowed me to stop worrying about my appearance and what others think of my hair – in fact, I have had so many compliments on how it looks.

Before my hair system, I used to spend hours trying to cover up my bald spots and I would have a lot of anxiety surrounding leaving the house. Now, I can head right out the door without thinking twice! 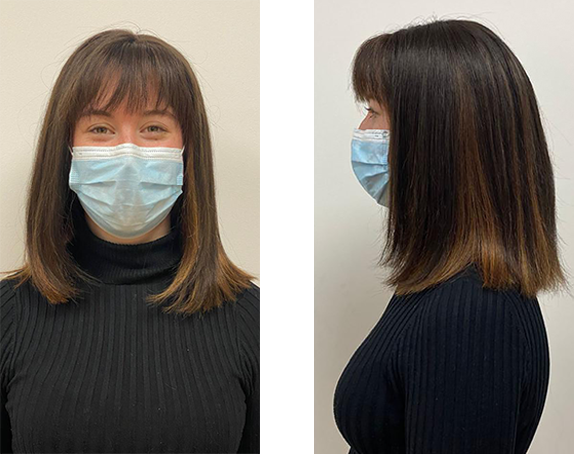 I am so grateful for the entire team at Hair Solved and for this well-needed service they are providing for women with hair loss of any kind.

To find out more about Trichotillomania and how Hair Solved can help you you can read more at our helpful and informative page here.

You can also read more inspiring hair loss stories from our clients experiencing all forms of hair loss and of all ages. Click here to read more.