The devastating impact of losing my hair. 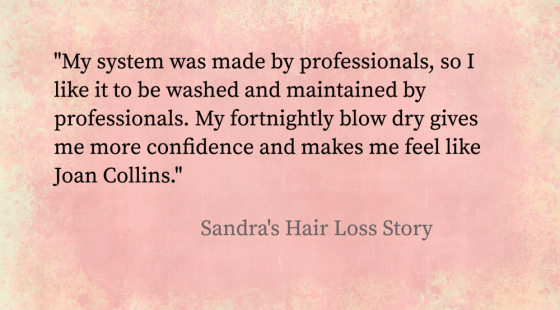 The impact of hair loss led to the most horrible time in my life.

Let me tell you about the impact of hair loss.

My hair first started to become thin in 2010 because of an under active thyroid. It quickly started to get worse, coming out in handfuls and resulting in large bald patches on the side and at the back of my head. To say I hated it would be an understatement, to be quite honest with you I didn’t want to live. I have always had long hair and I was embarrassed. I didn’t want to go out because no matter how I would do my hair I couldn’t hide the bald bits. And I spent a fortune on wigs, but they were far too hot and very uncomfortable, and they weren’t cheap.

I became a bit of a recluse; and was on anti-depressant tablets prescribed by my doctor. It was a horrible time in my life and the impact of hair loss was simply devastating.

My hair loss made me very paranoid, my doctor gave me a cream, but I think he knew himself it wasn’t going to work. I would rub it in the bald bits – but it was all in my mind because I was rubbing it in and imagined I could feel bits coming through. But it was my imagination because there was nothing there. It made me so sad because I had always had long hair. It became a vicious circle my hair was coming out more and more because I was stressed; and I was stressed at the fact my hair was coming out.

I wasted a lot of time in my life because of my hair loss.

Looking back, I wasted a lot of time in my life because of my hair loss. Not wanting to go out, not wanting to do anything. I was getting upset because I couldn’t go out. You know if we were going places I couldn’t go because I could not deal with my hair the way it was. My husband had a terrible time with me before I came to Hair Solved. But that is the impact of hair loss on your life.

I used to get annoyed because once a month he would go out with his friends. Just guys he knew from the army and I wouldn’t go because my hair was a mess. I didn’t want to go anywhere. But thankfully for both of us I saw an advert in the Sunday Mail for Hair Solved. I felt this could be the solution for me. I phoned up, made an appointment, met Natalie on one day and then I was booked in three days later for my system. Truthfully I have never looked back.

My Enhancer System has changed my life.

The system is so natural and easy to style. I’m slowly recovering from another illness but let’s say that’s another story. It means I cannot raise my arm above my head but I can still curl my hair or I bring my hair round at the side or put it up or put in a plait. I just love it. There is a lady who always comments on my hair and says, “I’d love your hair” and I say, “Would you?”.

She doesn’t know what I have been through to get to this point! But now I feel great and there is no turning back for me. Before the system I was living in hell and I could see how bad my hair loss was. You wonder what are other people thinking, what was my husband thinking? And that sounds stupid, but it isn’t stupid. Women don’t want to talk about it because they are so embarrassed.

I want to tell you about the confidence the system has given me.

I was attending a conference and I was asked if I would have my photo taken with a client to go in the Evening Times. If I hadn’t had this system, I wouldn’t have done it and believe it or not I had my hair up in a ponytail, a big ponytail, and I felt fantastic. I didn’t feel embarrassed. They were taking lots of photos of different people and asking what their jobs were. And there I am giving someone a cuppa and chatting away. And I could never have done that without that system – all pinned up and a lovely ponytail hanging down.

The emotional impact of hair loss is behind me now.

It was a horrible time and I don’t really like to think about it. Now I get up in the morning and go for a shower and then run the straighteners through my hair.

To look at my hair now and then at old pictures from before I started to lose my hair it looks no different. The team really are so talented. I’ve always loved having my hair blow dried at the Glasgow Salon and recently signed up for a blow dry bundle. I like my hair to be perfectly styled by the ‘professionals”.

The girls at work think my hair is amazing – everybody loves it But I love it the most; even when I first had the system it felt so natural, and I couldn’t imagine my life without it now. 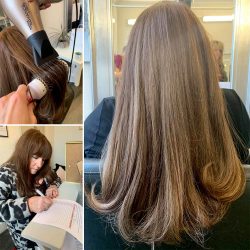 Find out more about hair loss.